Daily Journal #6 - Not so daily after all 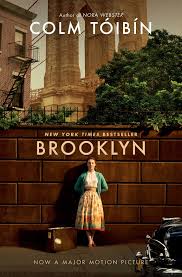 Recently I listened to the novel Brooklyn by Colm Toibin. I selected it because it was on one of those lists of books you should read before you see the movie. Not that I'll actually ever see the movie unless I stumble across it on Netflix a couple of years from now, but I thought I'd give the novel a try. It's a small break from the cozy mystery vortex I've recently inhabited.

I wasn't crazy about the book at first. It wasn't awful. The dialog (usually a deal breaker for me) was fine. The characters were well-sketched. It wasn't full of action, rather a telling of a life. A part of a life. I think it's what people might call a quiet story.

Told from the perspective of Eilis, the main character, the writing was straightforward and almost mundane. Was it lacking detail? I couldn't put my finger on it. Eilis seemed a little hard to get to know. She only told you the bare minimum about herself and there seemed to be a paucity in the sharing of her emotions. Sometimes I wanted to cheer her for her ability to hold it together and other times I wanted to throttle her for her naivete. True to most of my own life, she was a little late to understand things. By the time she had a full grasp, the consequences had already engulfed her.

As you have probably figured out, Eilis maybe bothered me most because I was seeing myself. I suppose that's a common reaction to many stories, but this one, in particular, struck me as Eilis went back to Ireland after having established a life in Brooklyn. When she returned to her home, she experienced the same feelings I have every time I visited my parents' home after I left for college. That feeling of being a guest in your own home. It's also the feeling I get now when I visit the kids in Georgia and stay with MathMan and Sophie.

I starting writing this from the spare bedroom of my former home. I was there visiting. We celebrated Sophie's birthday on the 7th. It was wonderful and loud and crazy and fun and sad to spend time with Nathan, Sophie, Nathan's girlfriend Kade and Doug. I couldn't help wishing that Chloe had been there, too.

But visiting there is hard. I AM a guest in my old home.  A new dynamic fills the house as it is just Doug and Sophie's home now. Three of us - Chloe, Nathan and I can only be guests there. When I am not there, I don't have to think about that reality. I prefer not thinking about it.

It takes me a day or two to adjust to the feelings of weirdness. I have to check myself. I can no longer act like a human bulldozer, cleaning and commanding while everyone rolls their eyes behind my back. I'm the person who gets to have things done for them as if by magic. I'm not entirely comfortable in this role even if it is kind of nice to get what you wish for once in a while.

By the time I've adjusted, I'm contradicting myself by feeling an itch to head home and be in my own space. Domestic Queen of my domain. I tell myself each visit that the next time I come, I will get a hotel room or insist that Sophie visit me in Indiana instead. It's not that the visits are unpleasant. It's just - - - - it forces me to take a good look at what I left behind and how our family has changed. While necessary to own the situation since I was very much the engineer of those changes, I think it's unhealthy to revisit my old life every couple of months. I never get beyond the guilt and regret before the reset happens.

But back to the novel. The thing I am most struck by now is how Toibin unravels the story in a way that's natural. Most of us aren't information dumps of self-knowledge. Hell, most of us struggle with self-awareness. Eilis doesn't spend large amounts of time puzzling over her own behavior. She's more interested in observing the actions of others and only occasionally assigning intent. It's only in short bursts of enlightenment that Eilis identifies some profound trait or value held by herself or another character that gives her some clue as to what may be not morally right or wrong, but right for her or the other character.

After a while, Eilis began to feel at home again in Ireland and began to question her life in Brooklyn. From Ireland, the time she'd spent in Brooklyn seemed like a dream. The life she'd had - school, work in a shop, her rooming house, the man she'd fallen in love with - it didn't seem real anymore.

And I can see how this happens, too. Having straddled two lives since 2013, I recognize the opposing tugs of the familiar and the unknown, sometimes being unable to know the difference between the two.