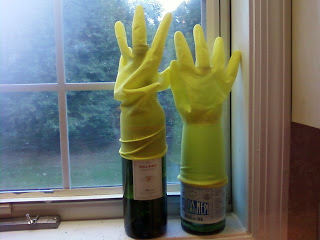 She woke up with a start.  Oh my god! Her daughter's friend used the bathroom at the end the hallway last night!  That bathroom was commonly referred to as the Kids' Bathroom so now you know all you need to know about it.

She rummaged around in her mind for the date when last she cleaned that bathroom.  Had it been a Quick Clean(TM) a couple of weeks ago?  Or was it a month or so ago when she'd bribed her youngest to do it?  That was the day when she didn't feel like cleaning it even though it was beyond a health hazard.  She'd just painted her fingernails and there were no rubber gloves to use to protect them.  They'd all gone missing.  Again.  The last time she'd had some, they became part of some neighborhood performance piece - filled with water or pudding and painted up to look like chickens.  Something like that.  Maybe they were supposed to be roosters.

So she asked the youngest to clean.  The oldest was at work, the middle at some baseball field getting covered in red Georgia clay.

When she approached her darling, she didn't seem terribly interested until some payola was introduced as an incentive.  Negotiations ensued.

"I'll give you two dollars for a thorough job."

"Make it ten."
"Two fifty.  Three."
"You're being ridiculous.  Seven."
"Three fifty and don't push it."
"Seven."
"Five and if you say anything other than okay, the deal is off, I keep my money and you run in place carrying two full jugs of water the whole time I'm doing it."
"You've been watching Malcolm in the Middle again."
"Going, going..."
"Done.  Five dollars.  Do I have to do it now?"
"Yes."

And so she did and she did a thorough job.  For one brief, shining moment, her lust for money took hold and she asked if there might be more she could do.  So her mother paid her an extra two dollars to dust and vacuum the living room.

But that was then.  This was retro-active panic gripping her this morning.  She sprang from her bed not to fly to the window and throw up the sash to look for evidence of a jolly little fat man carry a sack of gifts on his back, but to fly down the hallway to confirm just how embarrassed she should be on this otherwise calm Saturday morning.

It was worse than she thought.  She lifted the toilet seat and lid and died a thousand deaths of shame.  Mucky.  Yellow stains.  Flecks. A brown skid decorating one side of the bowl.  Dark, short curlicue hairs scattered over it all.  It looked as though Jackson Pollack had found a new canvas.

"I've been in back road truck stop restrooms cleaner than this," she muttered.

Her husband walked out of the bedroom scratching his belly and yawning.  "Did you say something?"

She could clean now and at least feel as though she learned her lesson.  Saying out loud to three teenagers and assorted cats "Some one needs to clean the bathroom and I do NOT mean me" was too vague, too imprecise.  Such a loose statement made to children and young adults amounted to an anachronism.  Everyone assumed that "someone" was always somebody else.

She thought of her many mistakes as she cleaned that bathroom and moved on to the next - the basement bathroom.  That was where they kept the litter boxes.  As always happens in these moments of crisis cleaning, one thing led to another.  She scooped out the chunks from the litter, cleaned the sink and toilet, shined the mirror, swept the floor and ultimately got on her hands and knees to wash it.  That lead to the same thing in the kitchen, three loads of laundry, vacuuming and spot cleaning the living room carpet, wiping down the stove, fixing the loose screws on the coffee table, boiling eggs, putting a table cloth on the dining room table and carrying out the trash.

Toward the end of the frenzy, she inspected her damaged manicure and shrugged.  It was time for a redo anyway.

Her daughter finally emerged from the cocoon of her bed and sauntered into the kitchen.  Normally one doesn't speak to this person before she's been awake for two hours, but there was no time to waste.  She had to spread her shame around to someone who might be capable of relating to it.  Later, she would realize the folly of that idea.

"I can't believe you let your friend use that disgusting bathroom."

"Well, tell him that it doesn't always look like that."

She opened her mouth to protest, but saw the futility of it.  Of all of it.

Her daughter sensed her dismay.  "Don't worry though.  He pees a lot.  It's what he's known for among our friends.  The last time a bunch of us went to Six Flags, we had to stop three times so he could go pee."

"Okay so what's your point?"

"My point is that he's probably seen far, far worse."

"I am not comforted by that thought." 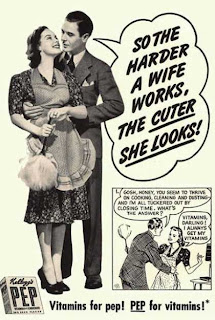