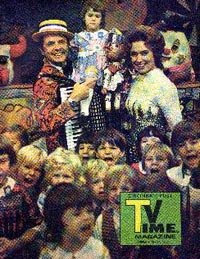 Darling Sis left a note on my Facebook this morning to tell me that a piece of our childhood had ended. Uncle Al Lewis, a children's television icon from the 1960s and 1970s, died on February 28th.

Oh the hours spent in front of the television watching Uncle Al, Captain Wendy and the other puppets and cartoons....

While I was out trolling around for some footage and photos, I came across this website. If it weren't already so late as I post this, I would be on it for hours, I suspect. As it is, I'm going to be going back to see more of what shaped me and the way I view the world, what I find funny, etc. I'm part of the television generation. There is no doubt about it.

Most metropolitan areas big enough for a couple of television stations had local kids programming (this link has shows from all different cities). Did you watch it? What was it?

Please pass the Mama's cookies and cherry Kool-aid for dunking them. Thanks!
By lisahgolden at 11:45 PM

Email ThisBlogThis!Share to TwitterShare to FacebookShare to Pinterest
Tags: Nostalgia