Adventures in Real Parenting: The Bitch Is Back

On a blog far, far away, I would refer to myself on my worst mothering days as BitchMom. Oh, those were the days. I skimmed some old posts and realized that I have become a much more sedate mother than I used to be. I don't yell quite so much and I hardly ever threaten karate chops anymore. I'm more likely to use stealth psychological warfare, passive-aggression and periods of long silence. Look, I didn't suggest that I'm now Mother of the Year material, but at least I'm less volcanic.

In gratitude, The Spawn should be dancing around me, singing songs of praise and joy. Instead, they carry on as if they haven't noticed the diminished rages and my new ability to not lose it so much, so quickly, so intensely.

I worry, though, that the calm is about to be tested. MathMan leaves today for a trip to Washington, D.C. with his school. The marching band is going to be in the Inaugural parade and MathMan is one of the chaperons. I tell you this with just the slightest bit of envy because he gets to go. The reality is it's going to be cold, crowded and he's traveling with a bunch of teens. My envy is definitely tempered knowing that. 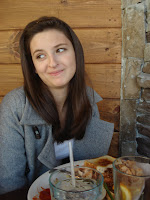 What this means to me is that I will be alone with The Spawn for five whole days. There will be no buffer, no one to point at and say "ask him." No escape! Fuckery. And this goes on until Wednesday, which will actually mean Thursday because when he gets home on Wednesday night, I'm hardly going to be able to turn the whole mess over to MathMan until he's had a chance to unpack and get his bearings. Again, I say fuckery.

The Spawn, of course, are doing what they can to test my placid demeanor. The Dancer isn't really a problem, though she's developed some aches and pains that are going to require a trip to the chiropractor, I suspect. The Actor has been pushing the limits with his mouth and can get on my last nerve as he narrates whatever the hell he's doing. However, none of this is new and we've both learned to adjust. I admonish him for cursing, he rolls his eyes at my hypocrisy. We know where we stand with each other.

It is Cupcake, though, who may try my patience most these next few days and I'm trying to steal myself so that BitchMom doesn't make an appearance. Were I honest with myself and you, I would just admit now that BitchMom has already returned from her long exile and has hissed an ugly thing or six at Cupcake already this morning.

(Note - it's likely, if queried, The Spawn would scoff at the very idea that BitchMom had actually ever been exiled, but who's asking them? Not me. And if you do, there will be a karate chop coming your way.)

Back to the child on the hotseat. Cupcake is nothing if not predictable. We're finishing up week three of school after the winter holidays and she's over it. Done. Ready to move on to fifth grade after a looooooong stretch in front of the television, of course.

Twice this week, I got the call from the school nurse. Cupcake doesn't feel well. She doesn't have any real symptoms, but she's crying and disrupting class and generally not endearing herself to her teacher or her classmates. After a brief conversation about options, the nurse and I decided that a combination of threat, torture, isolation and deception would achieve our goal of keeping Cupcake in school 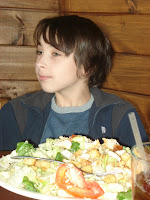 for another day. Thankfully, especially for Cupcake, it worked. She stayed. She might even have learned something. Who knows? I'm barely speaking to her.

I'm not kidding about the predictability of this nonsense. We go through it every single school year. She turns another year older in January and all the sudden her entire person becomes one gigantic, quivering, defiant head case who requires frequent, clutching, declared love and liberal amounts of time alone with her best friend the television.

When I'm feeling particularly like BitchMom, I point out the fact that she's channeling my departed mother-in-law who once got terribly bent out of shape when she was delivered a half of a bratwurst instead of the third of a bratwurst she'd specifically requested.

Cupcake can make that look sane. Don't get me wrong, I love this child. I just don't like her all that much right now. So yesterday, when the call came and I could see on my cellphone that it was the elementary school, I snarled to myself, took a deep breath and answered, knowing what was coming.

I opened with a direct plea, "Look, I'm working from home today. Can you please keep her at school?" Seriously, I was not in the mood to have a kid underfoot. Oh sure, they promise that they'll be unobtrusive, keeping to the back of the house, asking for nothing but a crust of bread and bit of water, but oh no. There's always scope creep when dealing with children.

The old adage "Give them an inch, they'll take a mile" was invented especially for kids. You go from tucking them in to watch dvds or television with some water or juice and by 10:30a.m., you're standing in front of the stove warming up a can of Campbell's Soup that they'll take four spoonfuls of before asking if there's any ice cream while you're busy running about pulling together the components of some ridiculously complicated art project the child just found in Highlights magazine.

Well not yesterday. And not the day before. I asked the school if there was any physical reason to send her home and the answer was no. I asked the nurse if there was someplace Cupcake could be isolated in case she became too disruptive with her crying. Yes - the Vice Principal's office has a place for kids to sit and read. Fine. And lastly, and this was critical, I asked the nurse to lie and tell Cupcake that I had gone to the office after all and wouldn't be able to come get her anyway, nor would I be home to take care of her. She had to stay at school. The nurse agreed. I must remember to get her something and send it in with Cupcake when she returns to school.

Yes, you read that right. When she returns to school. Cupcake is home today. While MathMan and I were rushing to get out of the house so I could drop him at school for his trip, Cupcake started lobbying to stay home sick. MathMan and I tried to stand firm, but eventually caved out of convenience.

When MathMann approached me this morning about letting her stay home because she had a low grade fever, BitchMom took over. MathMan and BitchMom were never happily married and I watched as MathMan made an enormous effort to remain calm in the face of me being on the verge of launching into a full-throttle fury.

His calm pulled me back from that precipice. I made my conditional statements to him, took a few deep breaths and struggled into my bra and underwear so I could stomp across the hallway to issue those conditions to Cupcake who lay pathetically in her bed. Her large brown eyes surveyed me warily. I could read it on her face. She knew I meant business since I was standing half naked and angry, ready to chew her to pieces.

"I'm so disgusted with this behavior. We both know you're not really sick," I began. She nodded.

"No television. No dvds. No art projects. You just stay in your bed and read until I get back," I ordered in clipped, angry tones. She nodded again.

"And as punishment, " I took a breath and watched as her eyes got huge. I could tell she was thinking that having to stay in bed and read was the punishment. "I'm not going to have a birthday party for you this year. If you can't go to school, you can't have a party. Understood?" I could tell by the way she was considering that last statement, she was trying to determine my resolve. Finally she nodded and her mouth opened and then shut as if she thought better of what she was going to say.

I stopped, but said nothing. "You mean it don't you?" she whimpered.

"I do. Now are you going to get out of that bed and go to school?" I asked, stooping to pick up some kid effluvium that was on the floor.

She didn't answer immediately. Finally she sighed and pulled the covers up to her chin. "I don't feel well. I'm going to stay home." That was her story and she was sticking to it. With that she rolled over and faced the wall.

"Okay. It's your choice, but don't ask me again about your birthday party. Your tenth birthday stuff is now officially over. Got it?"

I could see her shrug under the comforter. "I know," she said.

With that, I left, only returning to kiss her goodbye and to reinforce the instructions until I could return. As I drove MathMan to school, I indulged in ugly thoughts. Why didn't I just cram her into MathMan's suitcase so he could deal with her? Would I be fighting this morning battle with Cupcake every damn school day until spring break? And if so, how was MathMan going to like living full time with BitchMom again?

So Cupcake got her way and is home lolling about, pretending to be miserable. Then we have the weekend. Monday is a holiday. By the time Tuesday rolls around, I may as well quit my job and home school the evil little troll.

For her part, BitchMom smiled slyly as she thought wistfully about the fact that she is off the hook for having to pull together a birthday party for a bunch of ten year old girls, especially those who'd been plotting an overnight.......

Email ThisBlogThis!Share to TwitterShare to FacebookShare to Pinterest
Tags: Adventures in Real Parenting