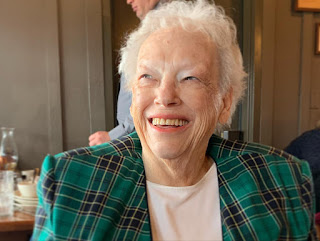 To know Rosie Hewitt was to know her smile and her laugh. She loved to crack a joke.

An avid reader of mysteries, a watcher of cooking shows, a fan of the Cincinnati Reds, Rosie had the most beautiful penmanship I ever saw. She enjoyed quilting, crossword puzzles, and watching Rick Steves’ Travels on PBS. She loved taking drives as long as the road wasn’t too curvy because she was prone to motion sickness. But that didn’t usually stop her from going along for the ride anyway.

A few years ago, she was itching to get out of the house and volunteered to be my lookout as I drove around the countryside taking photos of barns. We had a nice drive through Switzerland and Jefferson Counties and stopped in Madison for lunch at the Key West Shrimp House. It was a lovely day. I’m grateful for the memory. I lived away from the area for many years and couldn’t spend much time with my parents, so these moments mean so much to me.

Mom loved food. She enjoyed cooking and baking and still possessed the same Good Housekeeping cookbook she used in the 1970s. Even so, she loved trying out new recipes and her Pinterest account was full of recipes to try. (Oh, how she took to social media once she got started!) She made delicious fried chicken with mashed potatoes and gravy. Her Texas Sheet Cake was legendary, especially when served with Dad’s homemade vanilla ice cream.

Rosalie (Rosie) Anne Lawson met Paul Hewitt at the Frisch’s Big Boy in Aurora in 1958. They were married on March 19, 1960, in Rising Sun, Indiana. Rosie followed Paul to France where he served in the Army. There they lived in Orleans until Rosie left in 1961 to return to the United States to give birth to their first daughter Denise.

Rosie went to work outside the home in 1970 as Ohio County (Indiana) Recorder, an office she held from 1975 – 1978. She followed that position with four years as the Ohio County Auditor after being elected in 1979. Later she was the Office Manager and Bookkeeper for Paul H. Rohe Co. in Aurora, worked for the Dearborn County Division of Family and Children and served as the Executive Secretary to Rising Sun Mayor Mark Guard from 1995 – 1999.

Rosie was involved in her community and wanted the best for her adopted hometown. In addition to working at City Hall and for the County, she served on several committees throughout the 1980s and into the early 2000s. She was the leader of the Lucky Charms 4H Club in the 1970s and 80s and directed some of the best Share the Fun skits to ever happen in this corner of Indiana.

After retirement, Rosie spent time with her husband Paul catching up on all those years when they were both working and so busy. They enjoyed getting together with the graduates of Aurora’s Class of 1956 for monthly lunches. Early in retirement, they traveled. More recently, they stayed closer to home, but still enjoyed drives to Vevay for ice cream at Shell’s and trips across the river for lunch at Jewell’s on Main. And while Dad stayed home, Mom took part in her Home-Ec Club activities and loved a day out with her sisters Jan and Nancy.

Rosie pushed us to do better, be better. She wanted each of us to reach our potential. For me, that meant forcing me to enroll at Ball State against my wishes. I told her many times how much I hated her then, but how grateful I was for the push. Because of my mother, I got to see, do, visit, try, and be things I never would have imagined.

In 2019, our family suffered an unexpected tragedy when David died as a result of a car accident. He was 49. Watching one’s parents survive a child’s death is impossible to describe. But Mom and Dad endured and although I know they suffered privately, they put on a brave face and got on with it.

And now our father, Rosie’s companion for over 60 years, will do the same. It’s been hard to lose someone during the COVID-19 Pandemic because we’re not able to grieve or give comfort as we know it. My sister couldn’t spend some last moments with Mom. She has a chronic condition that leaves her compromised. The required physical distancing meant that Dad and I could individually see Mom for 15 minutes before she died. While I could be with her, it meant that I had to leave Dad alone in the car. It was bizarre and sad and frustrating. While we are not the most demonstrative family, it’s been hard to not at least give him a hug during all of this.

The staff at Highpoint Health in Lawrenceburg, Indiana, could not have been kinder. They gave me the opportunity to talk to Mom on the phone while she slipped away. For that, I am grateful, too. There are so many people who won’t have the chance to say one last I love you to their dying loved ones.

I had a text from a friend who recently experienced the death of his father in this time of quarantine. He wrote that it will seem as if Mom won’t have the funeral she deserves. For someone who touched lives the way she did and who provided a kind word whenever she could, it seems a shame that we can’t truly celebrate her life.

This is my small offering.

Here are the standard details….

Rosalie (Rosie) Anne Lawson was born August 3, 1938, in Milan, Indiana, to Carlton and Gertrude (McMullen) Lawson. She was welcomed home by brother Carly and sister Jan. According to an interview conducted by my daughter Sophia Golden a few years ago, she was named Rosalie after the song by Vera Lynn. Her brother Dan and sister Nancy came later.

Rosie graduated from Aurora High School in 1956 and went to work for a small bank.

Rosie is survived by her husband and daughter, her sister Jan (Wade) Turner, Rising Sun, and Nancy (Bill) Parks of Aurora, and sister-in-law Betty Burgess.

Donations in Rosie’s name can be made to the Ohio County Public Library in honor of Rosie’s love of reading.