Do I Detect a Theme? 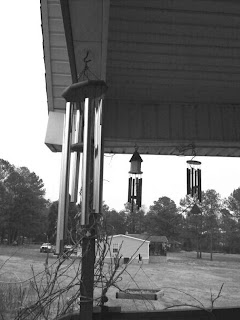 Yesterday was one of those days when I found myself checking the clock, not because it was going too slowly, but because it was ticking away too quickly. Seems like time is doing that a lot lately. I guess it's a function of getting older. MathMan would explain it to me as a matter of percentages, but that's just far too logical.

Oh, and gang? I worked from home again. And had The (sick) Actor home with me - again. You just know how thrilled I was about that. My lip syncing/porn surfing activities were thwarted yet again. I did paid work done and even managed to cross some errands off my to do list (shit! I forgot to call the attorney about the drop dead date for moving out of this house - um hello? denial?).

I even set aside the School of Benign Neglect protocol a time or two when The Actor was feeling well enough to play mumbly-peg with the good steak knives. Even the rules of Benign Neglect are meant to be broken sometimes.

As I drove into town, I kept my eyes peeled for rentals. I really am beginning to fret some about moving. We appear to be waiting until the very last minute to find a place to live. I feel like the mom in Brighton Beach Memoirs when she says "And suppose the house burns down this afternoon. Why do I need an extra quarter pound of butter?" Why do we need another place to live until we absolutely have to leave this house? We can't live in two places at once, right?

MathMan, ever the practical one, mentioned that it might be a good idea for us to spend a little time each evening weeding stuff out and packing things. Oh, I don't dispute that one bit. In fact, I think it's a fine idea. But I've been banned from asking that obnoxious question "who's taking the lead on this?" and so we continue to stare at each other across our laptops, make the occasional move toward lucidity, then go back to mouth breathing in front of blogs and newsfeeds.

It's so very distinct and palpable, the inertia that hugs us to our chairs, we could get it a Social Security number and claim it on our taxes.

So moving day looms - we think. As far as we know, we have about twenty-seven days left. In another incarnation of myself, there would be reams of lists, packing supplies galore, a new abode already secured and ready to be moved into, necessities properly transferred, etc. etc. etc. But not this time. Today, after working, I had a great time talking on the phone to MNMom, whose family is having its own financial struggles. I made dinner.

The aristocracy of Golden Manor even sat down and ate as a family. Wonders might never cease. We were missing The Dancer, though. That seemed symbolic somehow. Talk about denial! I'm still wrapping my mind around the idea that she'll be living away from home in a few months. She's gotten some wonderful scholarship offers, but I don't want to blog about it in detail because she's still waiting for a couple of responses and I don't want to jinx it.

Yesterday, though, as I drove around town taking care of errands, it seemed quite clear to me that our time in this little community isn't long........

Doing errands still has the added challenge of getting in and out of the car. The driver's side door is still stuck and I'm too cheap to fix the damn lemon. Kia can fix it when they get the piece of crap back.

So I continue to climb in and out of the car over the console. In some perverse way, I've grown to appreciate the challenge of it andwhile attempting to avoic impaling myself on the gearshift, spilling a cup of coffee or banging my head on the rear view mirror. Bonus points if I can do it while wearing pumps and extra bonus points if I can do it without catching some body part on the wires attaching the XM radio and bringing it crashing down. This morning, as I climbed out to pump gas (much to the amusement of the guy in the truck next to me), I did spill my coffee. So it's not all just one fabulous minute after another. Reality bites.

Tuesday, I did have one scary moment when the inoperable driver's side door wasn't so charming. I was driving down I75 toward the office when I had the bright idea to take my morning dose of speed. I rifled through my pocketbook, found the little pouch I keep my pill bottle in, opened the bottle and snapped one pill in half. So far so good.

I did the reverse of the fetching and rifling, stuffing the pill bottle back in its little faux leather pouch and dropping it back into the abyss of my purse. Without a thought, I tossed the jagged little half pill to the back of my throat and took a swig of now-cold coffee. At just that moment when I was about to swallow, I felt a tickle in my throat. Trying to clear my throat at the same time I was swallowing the pill served one purpose. It lodged the pill right in my esophagus. For a second I knew it was caught, but I didn't know to what extent. I tried to cough and nothing happened. I wheezed and made a pathetic squeak, realizing that stupid little pill was directly crossways and going nowhere. Trying not to panic, I unscrewed the lid to my water and took a drink with shaking hands. Holy fuck! I couldn't breath! My heart was racing when I felt another cough coming on.

With the second hard cough, the pill flew out of my mouth and hit the car door, landing neatly on the armrest next to me. When I looked down, I swear that evil little pill stuck the landing. I picked it up and examined it as I continued to drive. I thought about throwing it out the window, but decided against it. That pill wasn't going to beat me. I waited a few minutes, clearing my throat and drinking water and then popped that pill again. For good.

And while all of this is going on, all I could think was how I really needed to pee and how when I got to the office, I would have to extricate myself out of the car through the passenger's side, clambering over and out and hoping not to fall or impale or have an accident.

Or worse, what if someone saw me choking, turning blue on the side of the road and tried to help me. There I'd be, trapped in my car - going a lovely shade of azure, pantomiming with the my hands at my throat, the international signal for choking. Help! I'm choking!

Or like some kind of crazed animal, half hanging out the driver's side window, as I try to squeeze through there without falling splat onto the pavement. Or worse, having tried to climb over the console, catching a heel on the XM radio wires, lurching forward to break my fall - hopefully popping the lodged pill from my esophagus, but causing my bladder to give away. The scenarios passing through my head as I choked and coughed and spluttered and hoped with all my might not to wet myself were all pretty much no-win.

Thank goodness it didn't come to that.

For linda. The cowbell explanation. That won't last on the header, of course. Since I can't always be rearranging the furniture, I redecorate the header. It's not so hard on the back and it doesn't scratch the laminate flooring.
By lisahgolden at 11:19 AM

Email ThisBlogThis!Share to TwitterShare to FacebookShare to Pinterest
Tags: Apropos to Nothing, Attempted Humor, Random, Video